As a customer, a fixture at ASK, and since 1994 consulting as ASK TERRI, Terri has helped users and CAMUS in various capacities. If there is a grouping of MANMAN users or former ASK people, she'll be nearby. She has been working with MANMAN/HP/OpenVMS since 1982.

Ed has 30+ years of experience with HP3000/MANMAN at five companies.  At CAMUS he serves as Vice President and Membership Chairman.

Terry started in the Midwest, moved to the West Coast, and ended up on the East Coast. At CAMUS Terry serves as Treasurer. He has worked with the HP3000 since 1981 and with MANMAN since 1985.

Terry Floyd started at ASK and went on to found the Support Group, inc. He is currently supporting HP3000 and MANMAN. Terry has ‘been there, done that’ with MANMAN and attended/presented at every single conference/event…ever.

John is Manager of Facilities and IT at Westerbeke where they use HP3000/MANMAN. He started using  MANMAN in 1984 and has attended many MANMAN conferences over the years where he agreed to a board membership.

Bob Andreini is President of DataMaaS which offers Cloud based Metrics as a Service. Prior posts include Global IS/IT for MSI throughout the USA, Europe, and Asia and also CIO for a plastics manufacturer in IL. Bob is recognized as an expert in process and data management, information consolidation, and HP3000/MANMAN. He has been very active in user groups including CAMUS.

Mike has been supporting MANMAN on the HP3000 in small IT departments within various industries since 1984, including a recent migration to SAP. It's been a fun ride through the Fortran ‘77 conversion, Y2K, Sun-setting, and SOX.

Chris has worked as a long-time customer, consultant at ASK, and independent consultant. He attended every MANMAN conference through 2007. He now is with another ERP consulting group but still maintains connections to the MANMAN community. 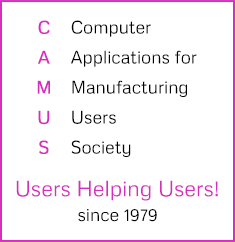